CREATIVE SOLUTIONS AND THE OPPOSABLE MIND

Following the disastrous Bay of Pigs invasion in 1961, President John Kennedy revised his decision-making process to avoid “groupthink” and encourage a healthy debate of opposing policy views among advisors. This revised decision process proved its worth two years later during the Cuban Missile Crisis, when Kennedy resisted CIA calls for air strikes against Cuban bases and opted instead for a naval blockade.  Kennedy’s blockade tactic was a truly creative solution – something less than a direct act of war, but more assertive than inaction or appeasement.

In his book The Opposable Mind, (and article in Winter 2014 Rotman Magazine with co-author Jennifer Riel) author Roger Martin contends that truly creative solutions, entail a synthesis – a novel solution that combines pieces of previous alternatives (Martin calls them “models”) in new ways to reap new benefits.  He calls the thought process producing this kind of synthesis integrative thinking.  Martin and his co-author suggest that we too often get stuck with an uncreative extreme solution because of risk aversion and failure to look with “fresh eyes” at how benefits are actually produced.  They propose a four-step process for integrative thinking that fully examines opposing models, and helps in developing truly novel solutions. 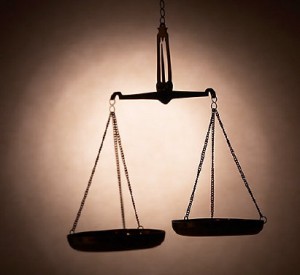 Martin does not believe in listing the negatives, weaknesses, or downsides for each of your alternatives.  He contends that the downsides of one model are usually just the upsides of the opposing model, and that you should focus more on benefits rather than potential risks.

As the authors describe it, I would liken Martin’s process to buying two very different Lego model kits, listing each kit’s features and benefits, then deciding how to build a new and different model from the best parts of each kit.

I won’t recap each step of Martin’s integrative thinking model, due to space limitations; however, I will suggest a few some simple tools to synthesize new solutions when confronting two opposing models.  First, let’s consider an example: We manage a medium–sized company and are trying to decide whether to keep a costly, in-house, corporate training function or outsource training work to a vendor.  Let’s look at the upsides and downsides of each option in a simplified two-by-two table (click on the table to enlarge):

Martin’s approach would suggest that, for each model, we should explore the assumptions and cause-effect relationships between features and benefits for each model.  Then try to build a new solution from the best parts of each model, without dwelling on the downsides.

Another Take on Downsides

This is good advice, but another author, Barry Johnson (in his classic book Polarity Management) tells us that we do need to list downsides for each model.  For Johnson, downsides matter, not just because we may want to avoid them, but more because downsides shape the behavior of two groups of people who must ultimately cooperate to implement the new solution.

Another important group are those whom Johnson calls the “Crusaders.” Crusaders are people who are fed up with the downsides of the current model and strongly advocate moving toward the upsides of the opposing model.  In our example, Crusaders might be the Finance people, who are sounding the alarm about uncontrolled overhead costs. They want to outsource everything and justify all training expenditures on a case-by-case basis. To truly understand this option, you’ll need to let the outsourcing Crusaders educate you.

The conclusion? Listing downsides is a mixed, but beneficial blessing.  It can slow the creative process of building a brand new model, but downsides will help to pinpoint people you need to talk to – both the champions of change and defenders of the status quo.

Escaping the Trap of Two-Dimensions

Both Martin and Johnson are correct in saying we must fully analyze and understand our conflicting models before we can create something new.  But the problem is: that’s not enough.  To come up with a real breakthrough, we need to escape the two-dimensional world of “upsides” and “downsides” for each model.  A simple but powerful “escape hatch” comes to us courtesy of creativity guru Edward de Bono.  In his book, de Bono’s Thinking Course, de Bono gives us PMI, “a powerful thinking tool that is so simple, it is almost unlearnable, because everyone thinks he or she uses it anyway.”  PMI stands for “Plus”, “Minus”, and “Interesting Points.”

PMI helps us escape the charging horns of a dilemma, not just by seeing the “points” more clearly, but also by finding new paths and forming new connections.  This then, is what integrative thinking and creative synthesis are all about.